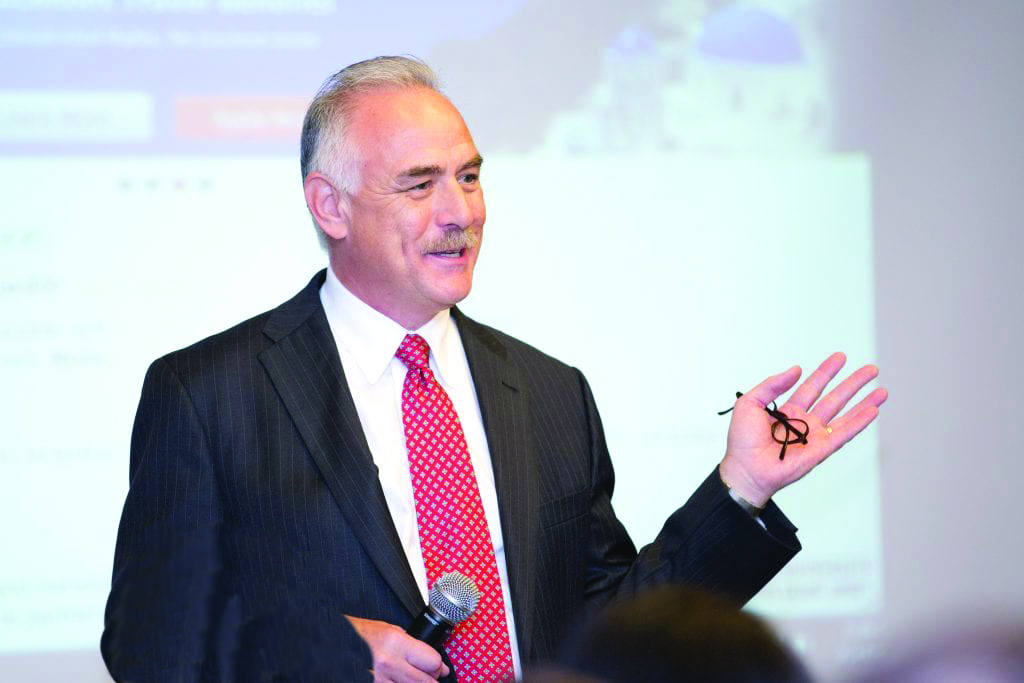 Joining HUECU in 1979 and becoming its CEO 15 years later, Gene Foley will retire in July, 2020 after more than 40 years of commitment, growth and success. Gene celebrated his 40th anniversary with HUECU last year and has served as President & CEO for the past 25 years.

George White, Chairman of the Board at HUECU, said, “Gene Foley exemplifies passion and dedication. Throughout his impressive tenure of more than four decades, he has led HUECU to remarkable growth and success, while also being an influential voice and tireless advocate for the credit union movement. His commitment to our membership

, Harvard University and the credit union industry is unparalleled, and through his efforts he has not only developed an outstanding organization, but has brought positive and meaningful changes for all of our constituents.”

Gene was first hired as an HUECU teller in 1979. His talent and commitment were quickly recognized, and as HUECU grew, so did Gene’s roles and responsibilities. After receiving his MBA from Babson College in 1990 and demonstrating 15 years of exceptional service and performance, he was appointed CEO by the HUECU Board in 1994.

As President & CEO, Gene helped build HUECU from a relatively small operation, with limited product offerings and assets of less than $90 million, into the preeminent and trusted Credit Union it is today with nearly $1 billion in assets. His dedication, innovation and leadership have been key to driving this nearly 10-fold growth over the past 25 years.

Constantly leading the Credit Union to diversify, grow and evolve, Gene looked for the financial pain points in the lives of our members and the institutions we serve; he then developed innovative and equitable products and solutions to best meet these needs. He added Harvard University students and alumni to the field of membership, developed an extensive student loan program and won the bid to issue the Harvard Alumni Association credit card. Never one to rest on his laurels, Gene recently took the Credit Union through a simultaneous core and online banking conversion in November 2019, in order to continue on the path of growth and success.

In addition to ensuring the Credit Union’s financial success, Gene made it a priority to push for more opportunities for the Credit Union to give back to the community. He has been a champion of financial literacy, creating dozens of educational programs for members and non-members alike to help thousands of people in the HUECU community escape debt, pay for school, buy their first home, and much more. He created Harvard University’s first financial literacy class, in collaboration with students and professors, to teach undergraduates valuable skills for managing their financial lives. The class has been part of the Harvard University curriculum for decades, and it is one of the many reasons Gene was recognized as a “Credit Union Hero” by Banker and Tradesman in 2012.

Gene has also been an influential figure in the credit union industry and has served in leadership positions both locally and nationally. He testified before Congress regarding data security on behalf of credit unions, wrote opinion pieces as an Advisory Board Member of Banker and Tradesman newspaper, served on the Massachusetts Fair Lending Task Force, was a key contributor in developing the multi-state Cooperative Credit Union Association (CCUA), and has taken on committee assignments and board-level roles with the Credit Union National Association (CUNA), the Massachusetts Credit Union League, and Payment Systems for Credit Unions (PSCU). His active involvement, solid reputation and passion for the industry have frequently sent him to Washington D.C. to participate in political and lobbying efforts geared towards the betterment of the credit union movement and its members.  The ultimate recognition of Gene’s extensive work and accomplishments in the industry came in 2019, when he was honored as an inaugural member of the Cooperative Credit Union Association’s (CCUA) Hall of Fame.

Gene said, “I feel blessed to have been an integral part of this organization, this movement and this University over the past 40 years; it has been an exciting and inspiring experience. I am immensely honored to have worked with so many incredible people during this time and to have done such meaningful work. More importantly, I have had the privilege to play a part in helping to improve the financial lives of three generations of members. I want to thank our members, employees and Board for trusting and supporting me and our Credit Union along this journey.”